An exoplanet that is as black as charcoal. Its blackness absorbs the surrounding light too fast

on March 03, 2022
HAT-P-7b (Kepler-2b) is an exotic exoplanet. It was discovered in 2008, has a radius far greater than that of Jupiter and has an orbital plane so inclined with respect to its star (108°) that it is in a nearly polar orbit. 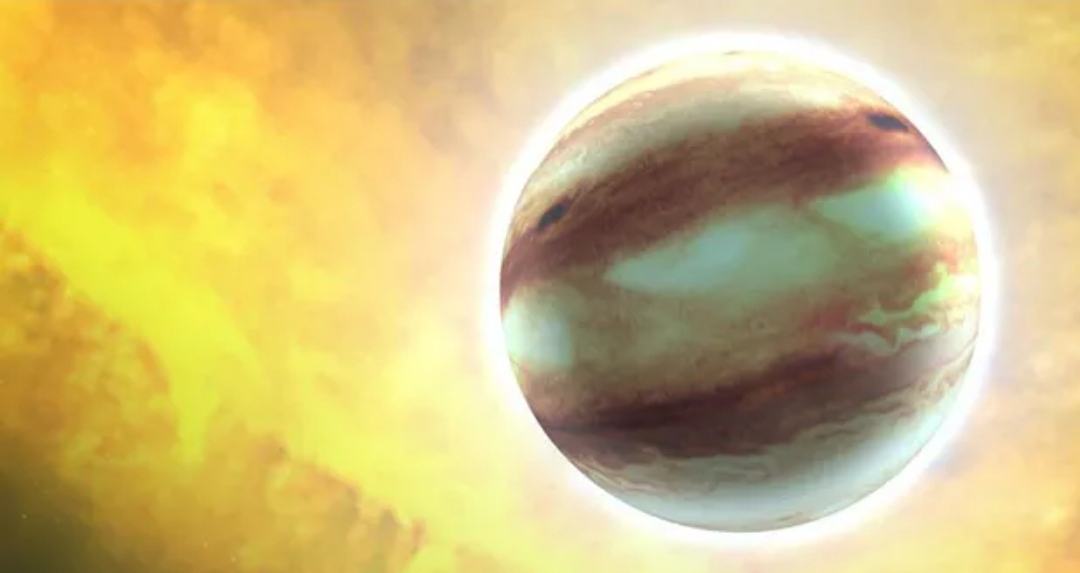 But what makes this planet truly extraordinary is how hot it is. HAT-P-7b hugs its bright, A-class star so tightly that it takes less than three days to orbit it—it's 20 times closer to its Sun than Earth.
Daytime temperatures on this planet are regularly calculated to be above 2,200°C, which is similar to that of the stars themselves.
This exoplanet is also known as hot Jupiter. HAT-P-7b belongs to a class of planets known as 'ultra-hot Jupiters'.
It is one of the darkest planets ever observed, with an albedo (surface reflection) of less than 0.03 - roughly that of a lump of charcoal.
This planet is so dark that it absorbs more than 97% of the visible light that shines on it.
Chemical models of its atmosphere predict that the crystalline aluminum oxide mineral 'corundum', a substance similar to ruby ​​and sapphire, condenses to form clouds when it cools slightly during the night.
Heavy heating has also inflated the planet's upper atmosphere into a bloated envelope and this, along with the luminosity of its Sun, means that HAT-P-7b is an ideal target to study with transmission spectroscopy.
In this technique, stars passing through a planet's atmosphere are analyzed to reveal information about the chemicals that have become imprinted on it.
Aaron Belo-Arufe and his colleagues at the National Space Institute, part of the Technical University of Denmark, are the first team to analyze HAT-p-7b using transmission spectroscopy and have discovered even more surprising details.
Astronomers used the High Accuracy Radial Velocity Planet Searcher for the Northern Hemisphere (HARPS-N), a high-resolution spectrograph on the 3.6 meter Telescopio Nazionale Galileo at the Roc de los Muchachos Observatory on La Palma in the Canary Islands.
They observed the single transit of HAT-P-7b across its star on the night of 18 December 2020 and recorded the spectrum of light passing through its atmosphere.
They reported a whole host of trace elements, including iron, calcium, magnesium, sodium and chromium – possibly even titanium.
Belo-Arufe's work has marked HAT-p-7b as one of the exoplanets with the greatest number of nuclear species detected in its atmosphere. And this metal-laden air is evidence that  How hot is the planet?
But Belo-Arufe's team also found that the spectroscopic lines of these atmospheric atoms were significantly blue-shifted in their observations, showing how rapidly the atmosphere is churning in the summer.
They calculated wind speeds of more than 2 km per second – about 7,200 km/h – as the air moving towards the day moves towards the cooler night.
In addition, because different atomic species are expected at different altitudes, the team was able to create a rough wind speed profile.
The next step, he says, would be to use emission spectroscopy to study the chemical composition of the planet's day-side.
Exoplanets