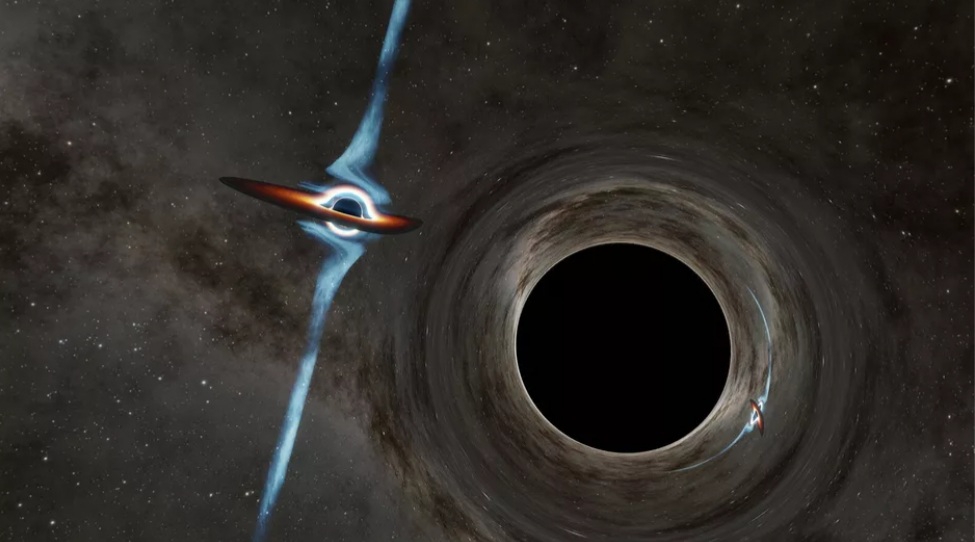 They’re about to collide. And when they do, it will shake the fabric of spacetime itself.

Combing through decades of radio telescope observation data, a team of Caltech astronomers discovered a radio pattern signals from the deep sky unlike anything ever observed before.

It was a flickering point of light, a blazar some nine billion light-years away. Every five years, it waxed and waned in brightness in a perfect sine wave, like clockwork.

Over nearly fifty years, this point of light had obeyed a clockwork cycle of five-year pulses — except for the twenty years where it didn’t.

While pooling data showed that the oscillation of the light formed a clear and distinct pattern, the mystery remained.

Related Article:- Astronomers study the inside of a black hole for the first time

In the middle of that elegant sine wave, there’s a big wobble, a dimming that lasted two decades.

The fluctuation didn’t match any known astronomical phenomenon. What could explain this departure from the pattern?

Galaxies often have black holes at their centers. For example, our galaxy Milky Way has a supermassive black hole named Sagittarius A* at its core.

Sometimes, they put on a light show - A quasar is the active core of a galaxy, powered by a supermassive black hole and illuminated by glowing-hot material falling in from its accretion disk.

Certain quasars eject a jet of plasma or raw neutrons — when their beams point straight at Earth, we call them blazars.

There are internal phenomena that can cause a blazar to change in brightness, but none of them was a match. But study coauthor Roger Blandford had a different idea.

He proposed a much simpler explanation: instead of an internal phenomenon, it was orbital dynamics. The fluctuations made sense if the point of light was not one entity, but two galaxies, about to collide.

One had a 'regular' supermassive black hole at its core; the other, a blazar. Instead of being pointed dead-on at us along our line of sight, the blazar’s jet was perhaps five degrees off-axis.

As the black hole and blazar whip around their common gravitational center, the blazar moves in a circle. Like a flashlight, sometimes it’s in our eyes more than others.

'We knew this beautiful sine wave had to be telling us something important about the system' said project mentor Tony Readhead.

'Roger’s model shows us that it is simply the orbital motion that does this. Before Roger worked it out, nobody had figured out that a binary with a relativistic jet would have a light curve that looked like this.'

When two galaxies merge, the supermassive black holes at their centers tend to 'sink' toward the gravitational center of the new, combined galaxy.

As the black holes spiral in toward one another, their enormous masses disturb space and time, kicking up gravitational waves.

Eventually, the black holes collide. When they do, they each contribute their already mind-boggling mass, creating a monstrous new black hole at the new galaxy’s core.

When we detected gravitational waves the first time around, LIGO was instrumental to the project.

But LIGO can’t see this collision– simply because of the enormous mass of these celestial behemoths.

The supermassive black holes at the centers of galaxies have millions to billions of times the mass of our sun.

These huge collisions give off lower frequencies of gravitational waves than LIGO can detect.

However, the upcoming Laser Interferometer Space Antenna (LISA) mission would detect merging black holes in the range of a thousand to ten million solar masses.