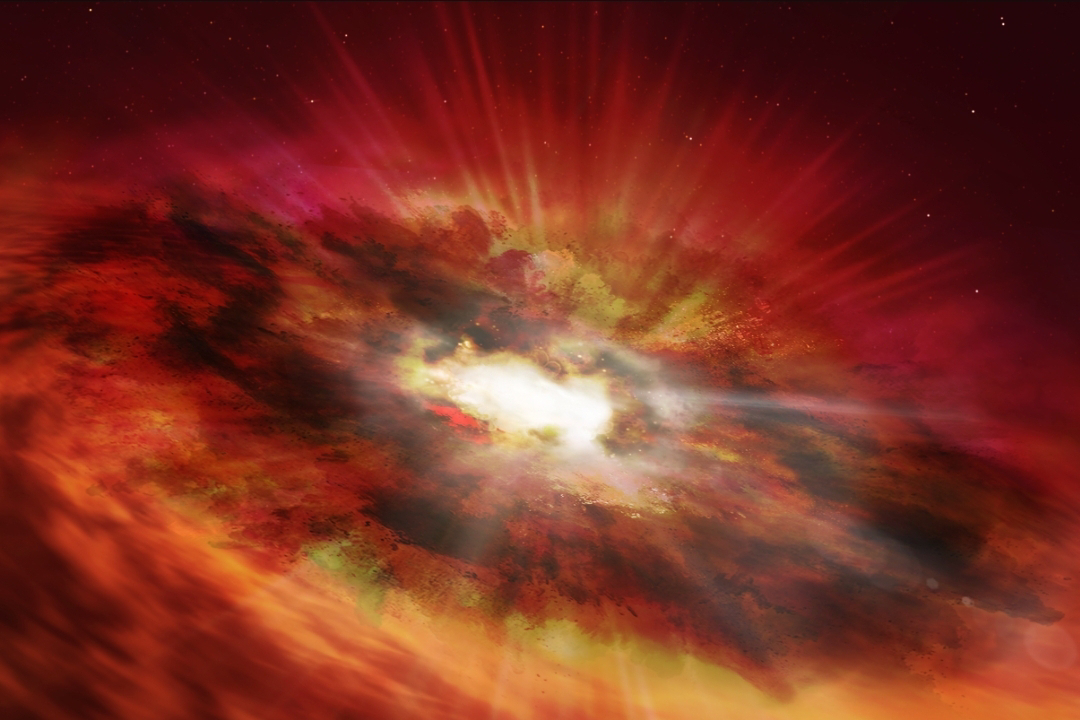 Researchers believes, this early cosmic object could potentially be an important link between star-forming galaxies and their emergence, supermassive black holes.
According to astronomers, this is the first and unique discovery of its kind in the history of space exploration.
Till now, this aspect was not taken care of even by the best research institutes.
Astronomers have worked hard to understand the origin of supermassive black holes in the early universe.
These objects were discovered at a distance of only 750 million years after the Big Bang event.
Rapidly growing black holes in dusty, early star-forming galaxies are predicted by theories and computer simulations but have not yet been observed.
Now, however, astronomers have reported the discovery of an object—which they named GNz7q—that is believed to be the first such rapidly expanding black hole found in the early universe.
Archival Hubble data from the Advanced Camera for Surveys helped the team study compact ultraviolet emissions from the black hole's accretion disk and determine that GNz7q existed only 750 million years after the Big Bang.
"Our analysis shows that GNz7q is the first example of a rapidly growing black hole in the dusty core of a starburst galaxy in an era close to the earliest supermassive black hole known in the universe," explains Seiji Fujimoto, an astronomer at the University of California, New York.
Niels Bohr Institute of the University of Copenhagen in Denmark and lead author of the paper describing this discovery.
"The properties of the object in the electromagnetic spectrum are in excellent agreement with predictions from theoretical simulations."
Current theories predict that supermassive black holes begin their lives in the dust-covered cores of vigorous star-forming "starburst" galaxies before ejecting the surrounding gas and dust and emerging as extremely luminous quasars.
While they are extremely rare, examples of both dusty starburst galaxies and luminous quasars have been found in the early universe.
The research team believes that GNz7q may be a "missing link" between these two classes of objects.
"GNz7q provides a direct link between these two rare populations and provides a new opportunity toward understanding the rapid evolution of supermassive black holes in the early days of the universe," Fujimoto continued.
"Our discovery is a precursor to the supermassive black holes we see in later epochs."
While other interpretations of the team's data cannot be completely ruled out, the observed properties of GNz7q are in strong agreement with theoretical predictions.
GNz7q's host galaxy is forming stars at a rate of 1600 solar masses of stars per year and GNz7q itself appears bright at ultraviolet wavelengths but very faint at X-ray wavelengths.
The team interprets this - along with the brightness of the host galaxy at infrared wavelengths - to suggest that GNz7q is a rapidly expanding black hole that is still in the dusty core of its accretion disk at the center of the star-forming host galaxy.
As well as the importance of GNz7q to understanding the origins of supermassive black holes, the discovery is notable for its location in the Hubble Goods North Field, one of the most highly investigated regions of the night sky.
"GNz7q is a unique discovery that was found at the center of a well-known, well-studied sky region - showing that big discoveries can often be hidden right in front of you," said Gabriel, another astronomer at the Niels Bohr Institute. Brammer commented.
University of Copenhagen and a member of the team behind this result.
"It is unlikely that finding GNz7q within the relatively small GOODS-N survey area was just 'dumb luck', but the prevalence of such sources may in fact be much higher than previously thought."
Hiding GNz7q in plain sight was only possible for the specific wide, multi-wavelength dataset available for GOODS-North.
Without this richness of data GNz7q would have been easy to ignore, as it lacks the distinctive features that are commonly used to identify quasars in the early universe.
The team now hopes to leverage the spectroscopic instruments of the NASA/ESA/CSA James Webb Space Telescope to systematically search for similar objects using dedicated high-resolution surveys and study objects like GNz7q in unprecedented detail.
"With the James Webb Space Telescope will become possible to fully image these objects and investigate their evolution and underlying physics in greater detail." Fujimoto concluded.
"Once in routine operation, Webb will have the power to conclusively determine how common these rapidly growing black holes really are".
Content was originally published by NASA's Goddard Space Flight Center and Its edited.
Black Hole & Quasars