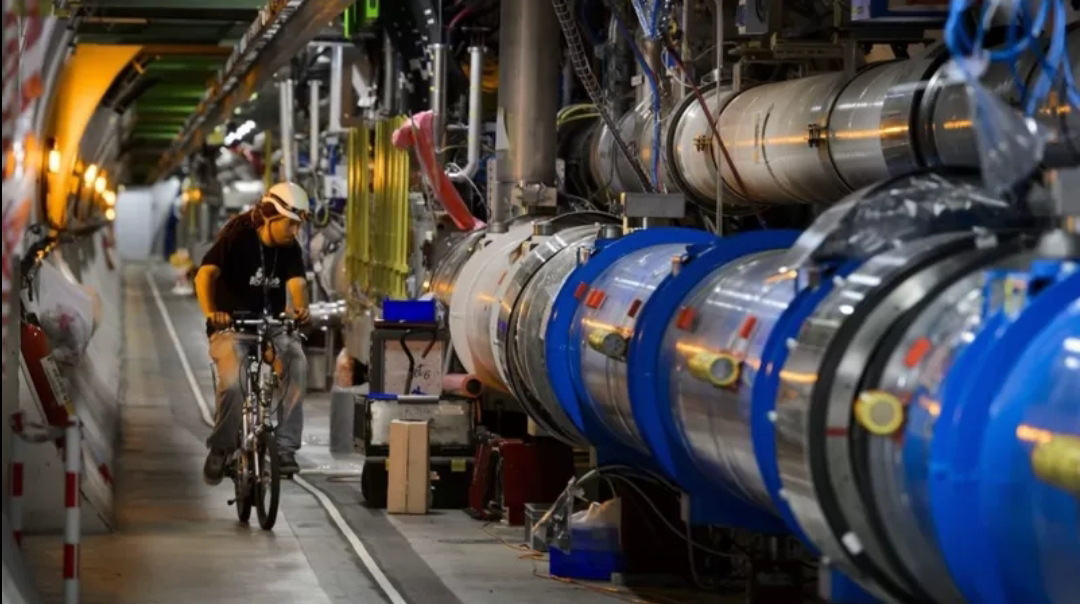 The world's most powerful particle detector, with the help of which the God particle was discovered, is now finding what physicists call 'universe glue'.
Dark matter, which binds the solar system, galaxies and galaxy clusters, and other celestial objects together.
After being closed for almost 3 years, the favorite temple of physicists has now opened and researchers from all over the world are coming here.
At that time, it was closed to upgrade the Large Hadron Collider under CERN.
Two beams of protons spinning in opposite directions in a 27-kilometer ring at an energy of 450 billion electronvolts (450 GeV) have been the source of many discoveries in the past, marking the beginning of a new phase for particle accelerators.
Physicists hope the beam collisions begin beneath Earth's surface will help their now 100-year-old discovery that the universe is about 5 times more prevalent than normal matter.
Dr. Rohini Godbole, Honorary Professor at the Indian Institute of Science, Bangalore, sees it as a sort of astronomical puzzle.
She says, 'Dark matter is the biggest puzzle in theoretical physics. I call it the astroparticle puzzle because it is a puzzle to both astrophysicists and particle physicists. This has implications for models of cosmology, the early universe and particle interactions'.
What is Dark Matter?
Physicists and astrophysicists have long said that the galaxies in our universe spin so fast that theoretically the gravity produced by their matter should not hold them together and pull themselves apart.
However, they are still intact, leading scientists to speculate that there is a phenomenon, which we cannot see, that binds them together.
Since it is invisible, scientists commonly know it as dark matter. According to CERN scientists, dark matter is difficult to detect because it does not absorb, reflect or emit light, and we have been able to infer its existence only by the gravitational effect that visible matter exerts on it.
'Dark matter seems to outnumber visible matter by about six to one, which makes up about 27% of the universe' CERN says.
'The latest set of research around dark matter is akin to studying the minute footprints left by an animal to describe it' Godbole says
The Large Hadron Collider will not only look for dark matter but also probe beyond the Standard Model and will find answers to the discrepancies in the model.
Developed in the 1970s, the Standard Model provides information about how fundamental particles and the three forces relate to each other.
LHC Upgrade
This huge observatory was greatly upgraded over a period of three years. Now it will be operated on more energy, along with it will also be able to deliver more data than before.
After the upgrade, the ATLAS and CMS experiments, two general-purpose detectors at the Large Hadron Collider that looked for the God particle for extra dimensions and particles that could make up dark matter, could each receive more collisions during this physics run. Compared to the last two physics runs combined.
The latest upgrades at the LHC will ensure four years of physics, as experts work around the clock to progressively reprogram the machine and safely measure the beam's energy and intensity before colliding experiments at a record energy of 13.6 trillion electronvolts.
The restart of the Large Hadron Collider is important because the new upgrades will allow the acceleration of protons at higher energies and higher luminosity, which in turn will yield more data.
"Since dark matter remains elusive, we need more data to explore these invisible particles, More data means more chances of finding these phenomena" said Dr Bedanga, a professor of physics at the National Institute of Science Education and Research in Bhubaneswar.
Physicists will focus not only on dark matter, but also on studying the subatomic particle W boson, which recently threw a bouncer at physicists when they found that it had a greater mass weight.
The W boson is responsible for a fundamental force at the center of atoms, and they only exist for a fraction of a second before decaying into other particles.
These particles have been used to explain the workings of the universe.
The upgrade will allow scientists around the world to study the Higgs boson in great detail and put the Standard Model of particle physics and its various extensions to the most stringent tests yet.
Cosmology & Astrophysics