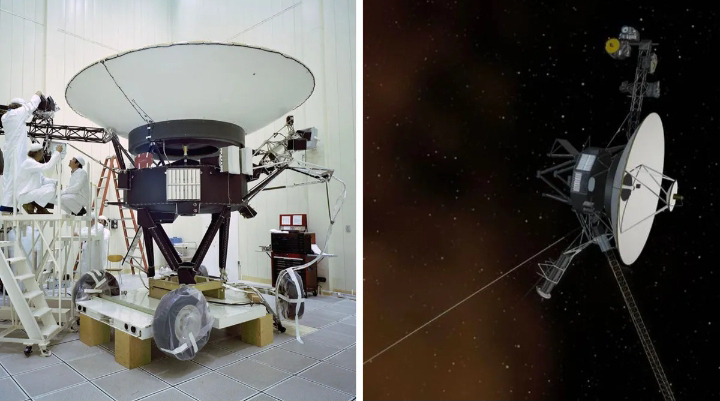 Voyager 1 and Voyager 2 are the longest-running missions in NASA's history. Nearly 45 years have passed since the Voyager mission was launched.
As a result of these, we were able to see the first glimpse of Neptune and Uranus.
Voyager 1 which was launched after Voyager 2 took a 'pale blue image' of our planet under the guidance of physicist Carl Sagan which was indeed quite an exciting experience. This image represents Segan's legacy.
Carl Sagan changed our views about space. He led many space missions. Jupiter's Cassini and even the James Webb telescope were his brainchild.
Voyager 1 and 2: Humanity's two interstellar space missions
Voyager 2 was launched to investigate the outer planets of our solar system. It was launched on 20 August 1977 from Cap Canaveral Space Launch Complex 41 via Titan IIIE-Centaur. Voyager 1 was launched almost 2 weeks later on 5 September.
The Voyager spacecraft were launched to take advantage of the outer planetary alignment that occurs once every 176 years. The alignment allows the probe to move from one planet to another with the help of a gravitational boost.
Voyager 1 was tasked with photographing and analyzing the gas giants Jupiter and Saturn. After flying beyond Jupiter and Saturn in 1990, the Voyager team prepared to shut down the spacecraft's imaging equipment.
Voyager 2 also took pictures of Jupiter and Saturn and headed towards Neptune and Uranus. Voyager 2 is currently about 12 billion miles (19 billion kilometers) away from Earth.
Voyager 1 entered the interstellar boundary in 2012, while Voyager 2 crossed the outer edge of our solar system in 2018. The Voyager team was ready for the interstellar phase of the mission.

Voyager 1 and 2 both discovered moons orbiting Jupiter, including Thebe, Metis, and Adrastea. Adrastea is estimated to measure only about 19 miles (30.5 kilometers) in diameter.

After capturing many images of Saturn and taking in new details of its icy moons and its rings, Voyager 2 used a gravity assist to travel on to Uranus.

This is where its path altered from Voyager 1, which was to focus on Jupiter and Saturn before traveling, making its way to the boundary of our solar system.

Voyager 2 became the first spacecraft to visit the ice giant Uranus when it made a close approach on January 24, 1986.

The spacecraft's readings showed that Uranus' atmosphere is roughly 85% hydrogen and 15% helium.

It also discovered 10 moons orbiting Uranus as well as a magnetic field that was, strangely, 55 degrees off the planet's axis — scientists are still unsure today why Uranus' magnetic field is off kilter.

After Uranus, Voyager 2 went on to make its closest flyby of Neptune on August 25, 1989, flying roughly 3,000 miles above the planet's surface.

The spacecraft discovered five new moons and four rings around what is now considered the most distant planet from the sun in our solar system — Pluto hadn't been disqualified at the time.

Voyager 2 is the only human spacecraft to have flown past Neptune, making its data invaluable even today.

Remarkably, NASA stats that Voyager 2 has enough fuel to keep running until about 2025, at which point the probe will be roughly 11.4 billion miles (18.4 billion kilometers) away from Earth.

It will continue to travel out into the Milky Way even when it can no longer send signals back to Earth — according to NASA's estimations, for example, Voyager 2 will be within 1.7 light-years (9.7 trillion miles) of the star Ross 248 in about 40,000 years.