Most Expensive Star Ever Found: A Massive Diamond "Lucy" 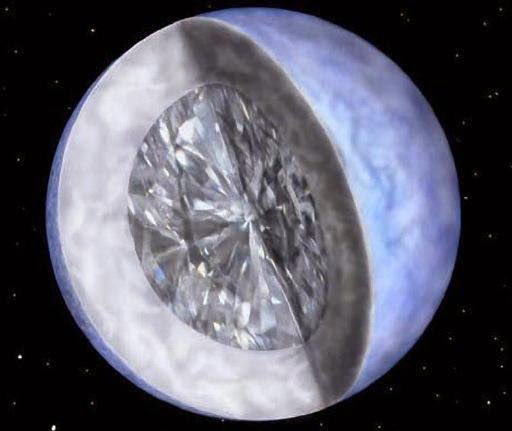 A star deep in the constellation of Centaurus is located at a distance of about 50 light years away from Earth.
This star is quite unique so astronomers nicknamed it as 'Lucy'.
This star is also known as V886 Centauri and BPM 37093. It is an ordinary white dwarf star. But it seems that some specialties are present in this star.
As many of you know, a white dwarf hot cinder occurs when a star uses up its nuclear fuel and dies briefly.
It is composed mostly of carbon and oxygen and is surrounded by a layer of hydrogen and helium gases.
In 1992, it was discovered that Lucy pulsates as a result of its core temperature falling below 12,000 degrees Fahrenheit (6,600 Celsius).
In the year 1995, scientists decided to use Lucy for an experiment. Scientists wanted to see what it was made of.
This experiment was performed using star pulsations to see if the crystallization theory is true.
The process that was used is called "asteroidology" or "stellar seismology", which uses a star's frequency spectra to determine what the true nature of the star's structure is.
This is similar to how geologists study the Earth's interior during earthquakes.
Scientists had found that about 90% of Lucy's mass had crystallized, and since Lucy's inner core is composed mostly of carbon, this could mean only one.
Lucy is the biggest diamond?
Lucy is a 10 billion trillion trillion carat and about 2500 miles across diamond.
Not only is this diamond forever but it also breaks the record of the last diamond to hold the golden jubilee record at 546 carats.
It is theorized that our Sun will one day go through the same phase as Lucy.
When it loses its outer shell and becomes a white dwarf, it too will crystallize and survive the end of its days in spectacular form, enjoying its diamond jubilee.
Stars