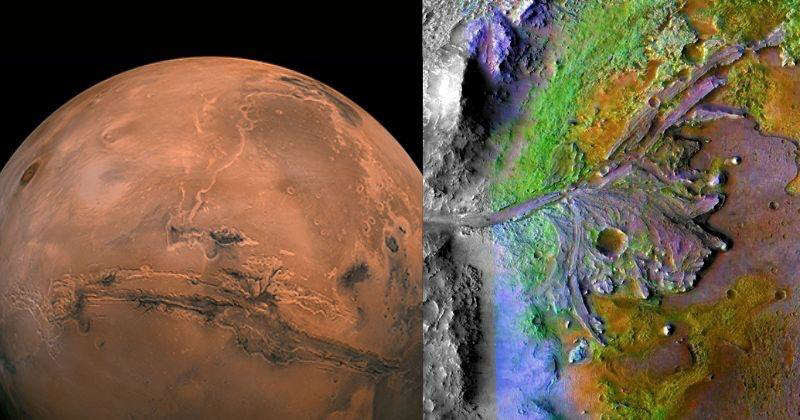 Image: Indiatimes
Recently, NASA's Mars rover has made a new discovery on Red Planet, which shows that although it is known as the Red Planet, but there is something green here too, as revealed by the report of TweakTown.
Researchers at Purdue University, who analyzed data received from the rover, discovered grains of olivine on the surface of Mars, resulting in some green areas in otherwise endless red Martian sands.
When Perseverance first arrived at Mars's Jezero Crater, researchers expected to find evidence of many red minerals on Mars. The fact is that Mars once had liquid water and even had a magnetic field similar to that of Earth.
Scientists also expected that the crater would contain sedimentary rocks, but instead, they actually found several volcanic rocks. In addition, most of these rocks were composed of large grains of olivine – a mineral that is the most abundant on Earth.
They are so abundant that they comprise more than half of the upper mantle. They are also responsible for painting many Hawaiian beaches green. The rover is currently examining samples that are about 4 billion years old, and in much older condition.
Scientists are trying to understand the origins of these rocks which could help them better understand the early conditions of the Red Planet and how and if they ever supported any life.
Briony Horgan, Purdue University associate professor of planetary science, said in a statement, "The rock in Jezero Crater is strongly rotating, more or less sitting on the surface for billions of years, we've been waiting to see them.
That's one reason why." that Mars is a very important laboratory for understand the formation of early Solar System."
He adds, "We're excited to see even better results about organics and pristine habitable environments. I think this is really setting the stage that Mars is this watery, habitable place, and  All the samples that we're getting back are going to help us understand the history of ancient microbial life on Mars."
Solar System