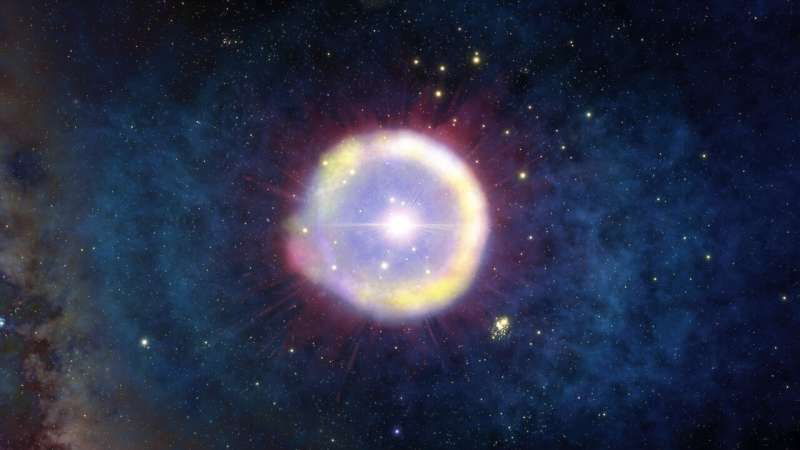 Massive, Population III Star in the Early Universe. This artist’s impression shows a field of Population III stars as they would have appeared a mere 100 million years after the Big Bang. Astronomers may have discovered the first signs of their ancient chemical remains in the clouds surrounding one of the most distant quasars ever detected. Credit: NOIRLab/NSF/AURA/J. da Silva/Spaceengine
The very first stars likely formed when the universe was only 100 million years old, less than one percent its current age. These first stars—known as Population III—were so titanically massive that when they ended their lives as supernovae they tore themselves apart, seeding interstellar space with a distinctive blend of heavy elements. Despite decades of diligent searching by astronomers, however, there has been no direct evidence of these primordial stars, until now.
By analyzing one of the most distant known quasars using the Gemini North telescope, one of the two identical telescopes that make up the International Gemini Observatory, operated by NSF's NOIRLab, astronomers now think they have identified the remnant material of the explosion of a first-generation star.
Using an innovative method to deduce the chemical elements contained in the clouds surrounding the quasar, they noticed a highly unusual composition—the material contained over 10 times more iron than magnesium compared to the ratio of these elements found in our sun.
The scientists believe that the most likely explanation for this striking feature is that the material was left behind by a first-generation star that exploded as a pair-instability supernova. These remarkably powerful versions of supernova explosions have never been witnessed, but are theorized to be the end of life for gigantic stars with masses between 150 and 250 times that of the sun.
Pair-instability supernova explosions happen when photons in the center of a star spontaneously turn into electrons and positrons—the positively charged antimatter counterpart to the electron. This conversion reduces the radiation pressure inside the star, allowing gravity to overcome it and leading to the collapse and subsequent explosion.
Unlike other supernovae, these dramatic events leave no stellar remnants, such as a neutron star or a black hole, and instead eject all their material into their surroundings. There are only two ways to find evidence of them. The first is to catch a pair-instability supernova as it happens, which is a highly unlikely happenstance. The other way is to identify their chemical signature from the material they eject into interstellar space.
For their research, now published in The Astrophysical Journal, the astronomers studied results from a prior observation taken by the 8.1-meter Gemini North telescope using the Gemini Near-Infrared Spectrograph (GNIRS). A spectrograph splits the light emitted by celestial objects into its constituent wavelengths, which carry information about which elements the objects contain. Gemini is one of the few telescopes of its size with suitable equipment to perform such observations.
Deducing the quantities of each element present, however, is a tricky endeavor because the brightness of a line in a spectrum depends on many other factors besides the element's abundance.
Two co-authors of the analysis, Yuzuru Yoshii and Hiroaki Sameshima of the University of Tokyo, have tackled this problem by developing a method of using the intensity of wavelengths in a quasar spectrum to estimate the abundance of the elements present there. It was by using this method to analyze the quasar's spectrum that they and their colleagues discovered the conspicuously low magnesium-to-iron ratio.
"It was obvious to me that the supernova candidate for this would be a pair-instability supernova of a Population III star, in which the entire star explodes without leaving any remnant behind," said Yoshii. "I was delighted and somewhat surprised to find that a pair-instability supernova of a star with a mass about 300 times that of the sun provides a ratio of magnesium to iron that agrees with the low value we derived for the quasar."
Searches for chemical evidence for a previous generation of high-mass Population III stars have been carried out before among the stars in the halo of the Milky Way and at least one tentative identification was presented in 2014. Yoshii and his colleagues, however, think the new result provides the clearest signature of a pair-instability supernova based on the extremely low magnesium-to-iron abundance ratio presented in this quasar.
If this is indeed evidence of one of the first stars and of the remains of a pair-instability supernova, this discovery will help to fill in our picture of how the matter in the universe came to evolve into what it is today, including us. To test this interpretation more thoroughly, many more observations are required to see if other objects have similar characteristics.
But we may be able to find the chemical signatures closer to home, too. Although high-mass Population III stars would all have died out long ago, the chemical fingerprints they leave behind in their ejected material can last much longer and may still linger on today. This means that astronomers might be able to find the signatures of pair-instability supernova explosions of long-gone stars still imprinted on objects in our local universe.
"We now know what to look for; we have a pathway," said co-author Timothy Beers, an astronomer at the University of Notre Dame. "If this happened locally in the very early universe, which it should have done, then we would expect to find evidence for it."
To find more information: Click here
Provided by National Science Foundation
Stars