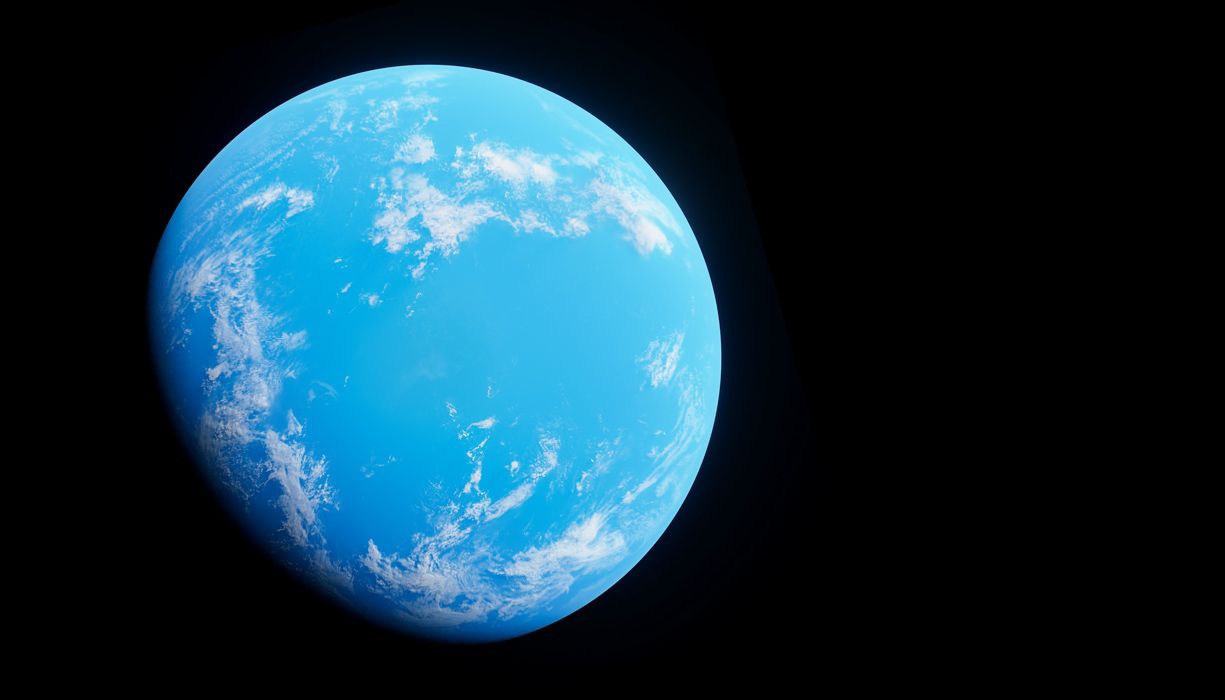 A 3D render of a blue wet planet - image by Planet Volumes/Anodé on Unsplash.

New research published in Earth and Planetary Science Letters suggests that Mars was born wet, with a dense atmosphere allowing warm-to-hot oceans for millions of years.

To reach this conclusion, researchers developed the first model of the evolution of the Martian atmosphere that links the high temperatures associated with Mars's formation in a molten state through to the formation of the first oceans and atmosphere.

This model shows that -- as on the modern Earth -- water vapor in the Martian atmosphere was concentrated in the lower atmosphere and that the upper atmosphere of Mars was "dry" because the water vapor would condense out as clouds at lower levels in the atmosphere.

Molecular hydrogen (H2), by contrast, did not condense and was transported to the upper atmosphere of Mars, where it was lost to space.

This conclusion - that water vapor condensed and was retained on early Mars whereas molecular hydrogen did not condense and escaped - allows the model to be linked directly to measurements made by spacecraft, specifically, the Mars Science Laboratory rover Curiosity.

“We believe we have modeled an overlooked chapter in Mars's earliest history in the time immediately after the planet formed. To explain the data, the primordial Martian atmosphere must have been very dense (more than ~1000x as dense as the modern atmosphere) and composed primarily of molecular hydrogen (H2),” said Kaveh Pahlevan, SETI Institute research scientist.

“This finding is significant because H2 is known to be a strong greenhouse gas in dense environments. This dense atmosphere would have produced a strong greenhouse effect, allowing very early warm-to-hot water oceans to be stable on the Martian surface for millions of years until the H2 was gradually lost to space.

For this reason, we infer that -- at a time before the Earth itself had formed -- Mars was born wet.”

The data constraining the model is the deuterium-to-hydrogen (D/H) ratio (deuterium is the heavy isotope of hydrogen) of different Martian samples, including Martian meteorites and those analyzed by Curiosity.

Meteorites from Mars are mostly igneous rocks -- they formed when the interior of Mars melted, and the magma ascended towards the surface.

The water dissolved in these interior (mantle-derived) igneous samples has a deuterium-to-hydrogen ratio similar to that of the Earth's oceans, indicating that the two planets started with similar D/H ratios and that their water came from the same source in the early Solar System.

By contrast, Curiosity measured the D/H ratio of an ancient 3-billion-year-old clay on the Martian surface and found that this value is ~3x that of Earth's oceans.

Apparently, by the time these ancient clays formed, the surface water reservoir on Mars -- the hydrosphere -- had substantially concentrated deuterium relative to hydrogen.

The only process known to produce this level of deuterium concentration (or "enrichment") is preferential loss of the lighter H isotope to space.

The model further shows that if the Martian atmosphere was H2-rich at the time of its formation (and more than ~1000x as dense as today), then the surface waters would naturally be enriched in deuterium by a factor of 2-3x relative to the interior, reproducing the observations.

Deuterium prefers partitioning into the water molecule relative to molecular hydrogen (H2), which preferentially takes up ordinary hydrogen and escapes from the top of the atmosphere.

"This is the first published model that naturally reproduces these data, giving us some confidence that the atmospheric evolutionary scenario we have described corresponds to early events on Mars," said Pahlevan.

Aside from curiosity about the earliest environments on the planets, H2-rich atmospheres are significant in the SETI Institute’s search for life beyond Earth.

Experiments going back to the middle of the 20th century show that prebiotic molecules implicated in the origin of life form readily in such H2-rich atmospheres but not so readily in H2-poor (or more "oxidizing") atmospheres.

The implication is that early Mars was a warm version of modern Titan and at least as promising a site for the origin of life as early Earth was, if not more promising.

More information can be found here.