New Research About The Universe Suggests Einstein Was Wrong 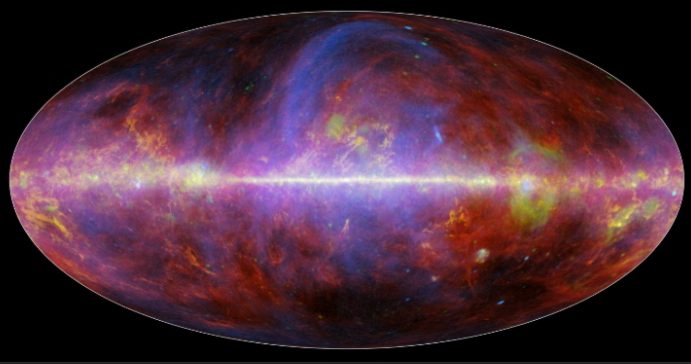 According to a new and detailed map of dark matter, the Universe may be smoother and more spread out than scientific estimates, the BBC reports.
This survey covered a quarter of the sky of the South Hemisphere, which may be undermine Einstein's theory of general relativity. This research may force us to change our understanding of the universe.
'If this disparity is true, then Einstein was probably wrong,' the Ecole Normale, which works on dark matter maps, told the BBC.
He said 'you might think it's a bad thing that maybe physics is broken'. But for a physicist it is extremely exciting. This means that we can discover something new about the universe we live in.
According to scientists, about 80% of the universe is made up of dark matter. But so far dark matter is no less than a mystery. Because we do not know what dark matter is made of and how it interacts with other matters existed in the cosmos.
However, scientific research has proved that it alters and distorts the light emitted from distant stars. According to scientists, the greater this effect, the higher the concentration of dark matter.
It is the largest and most detailed map ever created by an international team of researchers in collaboration with the Dark Energy Survey. Using data collected by the Victor Blanco telescope in Chile, the team mapped nearly 100 million galaxies.
This mapping shows that galaxies form quite massive super structures. The brightest regions of galaxies are the densest regions of dark matter formed from superclusters.
The dark regions of the universe are actually void regions where the laws of current physics cannot apply.
For Jeffrey, this is an exciting new moment in our understanding about the universe, "unveiling vast new swaths that show more of [dark matter's] structure," as he told the BBC. "For the first time ever we can see the universe in a different way."
Using the principles of physics set forth by Einstein, astronomers have been able to estimate how matter has spread over the universe's 13.8 billion years, beginning shortly after the Big Bang.
However, those predictions are a few percent off from new observations made by the Dark Energy Survey.
"We may have discovered something really fundamental about the fabric of the universe," Durham University professor Carlos Franck, who worked on current cosmological research, told the BBC.
Along with building on Einstein's theories, Frank helped determine the spread of the matter in the universe.
"I've spent my life working on this principle and my heart tells me I don't want to see it collapse," Frank told the BBC. "But my brain tells me that the measurements were correct, and we have to look at the possibility of new physics."
But according to Frank, this is not the time to dismiss Einstein's theory. "The big question is whether Einstein's theory is correct," he said.
"This seems to be true, except for some paradoxes," he said, adding that "the astrophysics of galaxies may just need some changes."
Miscellaneous