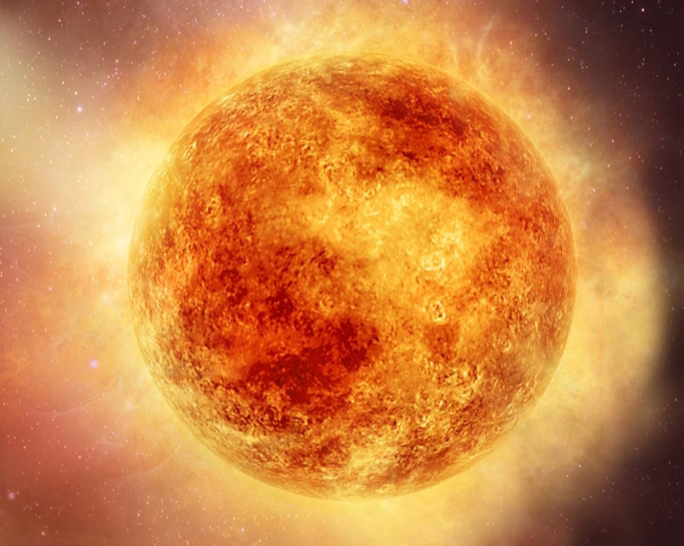 Betelgeuse is one of the most common bright stars to shine in the night sky. But its brightness is not always the same.
A team of researchers led by Jena (an astrophysicist) discovered that Betelgeuse appeared orange-yellow about 2000 years ago.
A star changes its brightness, size and color as a result of changes in its chemical reactions (nuclear fusion).
Measuring the duration of the color transition gives a lot of information about a star, such as age, mass and future supernova explosions, etc.
Why does Betelgeuse appear redder than before?
It is a giant star in the left side of the constellation Orion, located about 642 light-years from earth.
The researchers concluded on the basis of various historical sources that this star appeared much brighter about 2000 years ago than it is now.
The Chinese court astronomer Sima Qian wrote about betelgeuse's colors around 100 BC: white is like Sirius, red is like Antares, yellow is like Betelgeuse, and blue is like Bellatrix.
About 100 years later, the Roman scholar Hyginus described that the star located in Orion's right shoulder was similar in color to that of Saturn, i.e. yellow.
Further evidence from ancient authors such as Ptolemy suggests that Betelgeuse does not fit into a group of bright red stars such as Antares and Aldebaran.
"From these features it can be concluded that Betelgeuse at that time was in color between the blue-white Sirius and Bellatrix and the red Antares," said lead author Prof. Ralph Neuhauser says.
The color of a star gives accurate information about the stage of its development.
When stars combust the hydrogen thermonuclear fuel in their cores, they inflate and emit gases into space.
This expansion leads to a decrease in their surface temperature, causing a transition from yellow-orange to red.
This color change occurred over thousands of years, which is relatively minor by astronomical standards.
Supernova in 1.5 million years
Betelgeuse is far away from us, but it is still the most prevalent of the brightest stars in the Earth's night sky.
It is 14 times bigger than our Sun and about 100,000 times brighter.
According to Professor Ralf Neuhauser, "The fact that it changed in color from yellow-orange to red within two millennia tells, with theoretical calculations, that it has 14 times the mass of our Sun."
Such brightness comes at a cost. Betelgeuse's enormous energy requires that its fuel be spent quickly, which shortens its life.
The relatively recent color change indicates that Betelgeuse nearly burned through its hydrogen reserves, and is now working its way through its helium.
Once the star has run out of all its fuel, it will collapse under its own weight and undergo a spectacular supernova explosion.
The end is near, but not for the next one million years. "Betelgeuse is 14 million years old and in the final stages of its evolution.
In about 1.5 million years, it will eventually explode as a supernova," explains Ralph Neuhauser.
Stars