A 12-Year-Old Senegalese Boy Built A Telescope That Allows Him To See The Surface Of The Moon With Wires And Soda Cans. 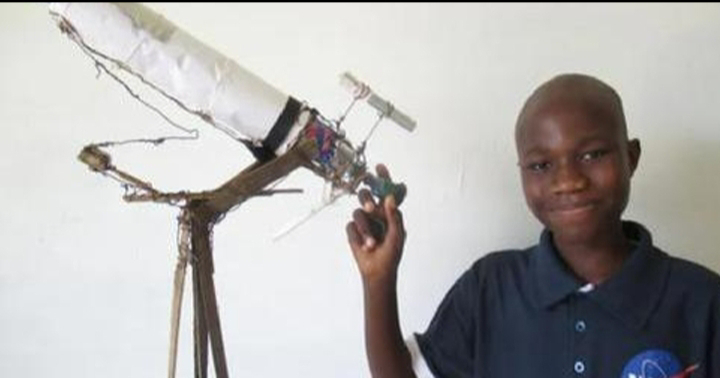 A 12-year-old Senegalese boy has demonstrated his acumen by building a telescope. Using only a few limited resources, he built a telescope that is capable to observe the surface of Moon.
Notably, discarded items were used to build this telescope, such as empty soda cans and low-quality wire.
In fact, his talent is quite commendable and makes him a phenomenal talent.
The interest in space and the phenomena of space after reading a book "The Whole Universe" inspired Malik Nadiye to build a telescope with the help of limited resources that are described above.
He used some old high-magnification eyeglass lenses that were taken from his father's broken spectacles. In addition, with the help of a camera lens, wire, paper, box and cane, he built his own telescope.
He is able to see the night sky and the surface of the moon with the help of a telescope made from these resources.
"It took about two weeks to build the telescope" a 12-year-old boy wearing a NASA polo shirt explained in a report to Spanish media El País" When I focused on the night sky and looked at the surface of the moon, I felt  that I can touch it.
"When one day I was at the door of my home and a man working on the street, He asked me what it is? So I told him it is telescope I made myself. So he captured some pics of me And shot a video or uploaded it on Facebook" Malik said.
Malik never imagined that his video would make him a celebrity in a short time, even as some astronomers contacted him and praised his work and promised to cooperate. In addition to astronomers, journalists also praised Nadia's curiosity and contacted her in Senegal.
Maram Kare, the president of the Senegalese Association for the Promotion of Astronomy, visited Malik Nadiye's home and gave him a more professional telescope for astronomical observations, which would allow the young boy to deepen his space observations.
“When I saw the video, Nadi’s curiosity reminded me of my childhood and I thought of all the efforts I made to spread this science.
I didn’t hesitate to react because I know that with a suitable tool, How difficult is it to observe stars without having an obsession and not being able to develop it" Maram said in a statement.
When reporters asked Nadia about her future dreams, the young boy told her "I just want to see the stars" He said
Miscellaneous