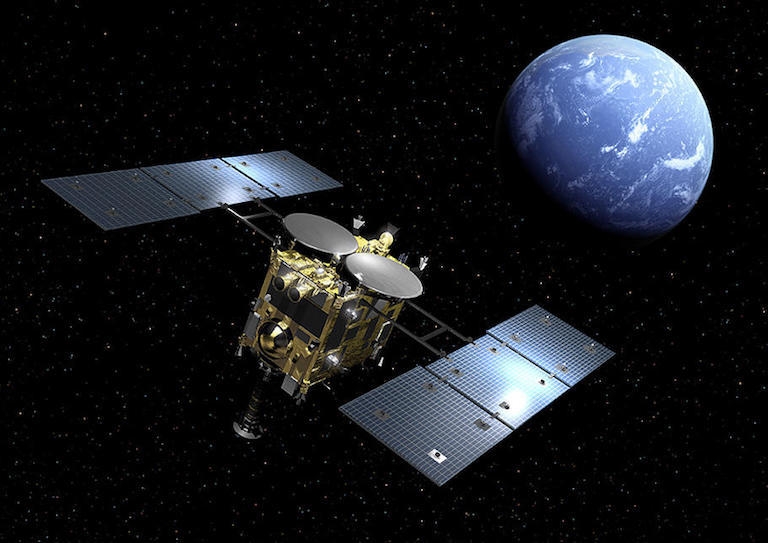 An artist's depiction of the Hayabusa2 spacecraft passing near Earth. Credit: JAXA
Dust pulses brought back from Ryugu (An Asteroid) are found to have existed before Earth and our planetary neighbours formed.
Dust grains from before the Solar System’s creation have been found in the samples of asteroid Ryugu brought back by the Japan Aerospace Exploration Agency's (JAXA) Hayabusa2 spacecraft.
Asteroids are the leftovers from when the planets formed 4.5 billion years ago and some still contain pre-solar grains.
These are the unprocessed remnants of the gas and dust that went on to create our Solar System, and have been found in roughly 5% of meteorites.
Though meteorites provide an easy way to collect asteroid material, they have been contaminated by their time on Earth, unlike the pristine Hayabusa2 samples that were collected directly from the asteroid in 2019.
The international team were keen to see if they could find pre-solar grains in the Ryugu sample and so looked for them using their isotopic ratios.
Isotopes are alternate versions of elements that have a slightly different atomic weight.
The ratio isotopes occur in is governed by the star they came from, and so the grains can be used to uncover where the material that made our Solar System originated.
Miscellaneous