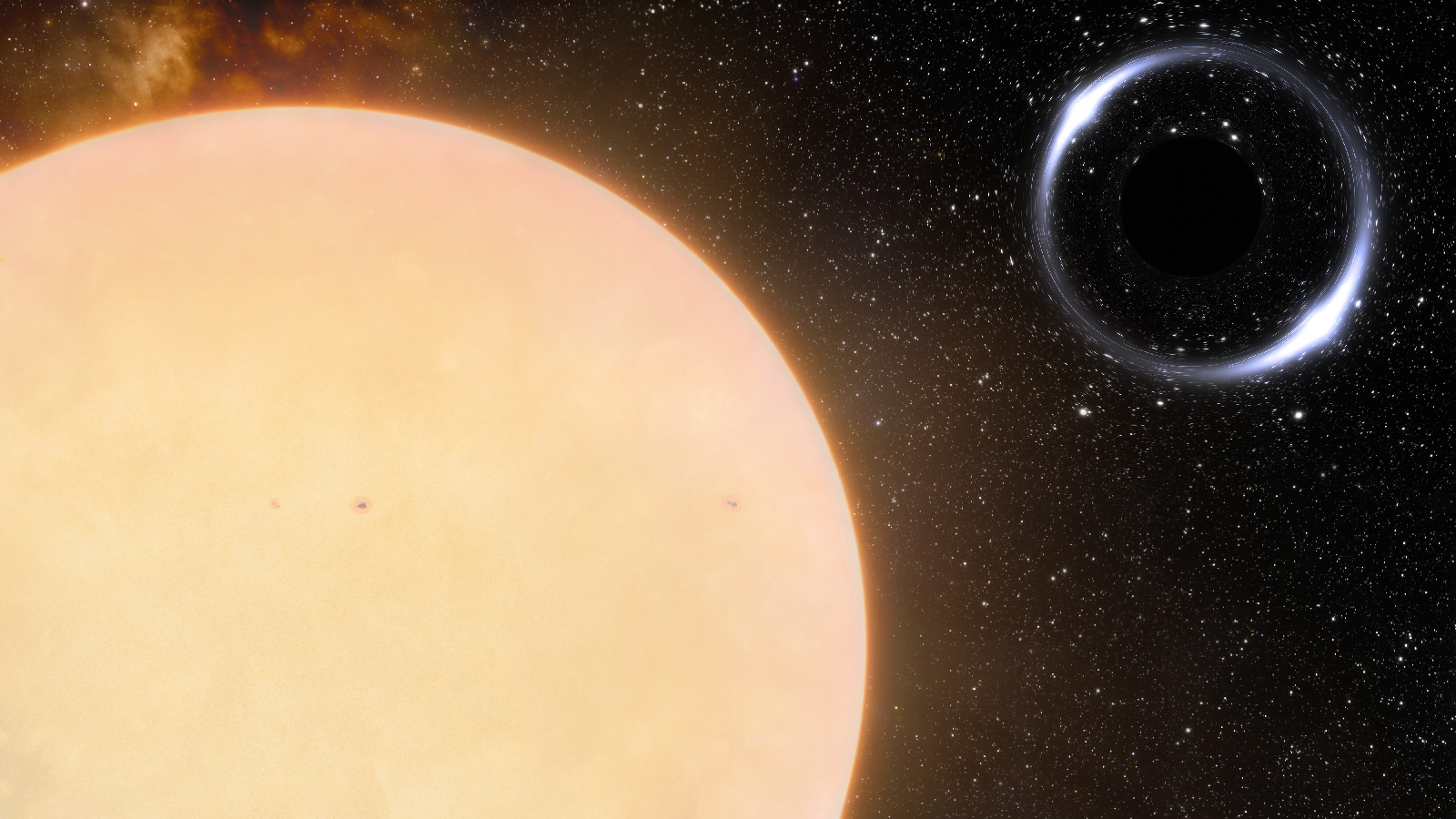 International Gemini Observatory/NOIRLab/NSF/AURA/J. da Silva/Spaceengine/M. Zamani
Astronomers using the International Gemini Observatory, operated by NSF’s NOIRLab, have discovered the closest-known black hole to Earth. This is the first unambiguous detection of a dormant stellar-mass black hole in the Milky Way. Its close proximity to Earth, a mere 1600 light-years away, offers an intriguing target of study to advance our understanding of the evolution of binary systems.
Black holes are the most extreme objects in the Universe. Supermassive versions of these unimaginably dense objects likely reside at the centers of all large galaxies. Stellar-mass black holes — which weigh approximately five to 100 times the mass of the Sun — are much more common, with an estimated 100 million in the Milky Way alone. Only a handful have been confirmed to date, however, and nearly all of these are ‘active’ – meaning they shine brightly in X-rays as they consume material from a nearby stellar companion, unlike dormant black holes which do not.
Astronomers using the Gemini North telescope on Hawai‘i, one of the twin telescopes of the International Gemini Observatory, operated by NSF’s NOIRLab, have discovered the closest black hole to Earth, which the researchers have dubbed Gaia BH1. This dormant black hole is about 10 times more massive than the Sun and is located about 1600 light-years away in the constellation Ophiuchus, making it three times closer to Earth than the previous record holder, an X-ray binary in the constellation of Monoceros. The new discovery was made possible by making exquisite observations of the motion of the black hole’s companion, a Sun-like star that orbits the black hole at about the same distance as the Earth orbits the Sun.
“Take the Solar System, put a black hole where the Sun is, and the Sun where the Earth is, and you get this system,” explained Kareem El-Badry, an astrophysicist at the Center for Astrophysics | Harvard & Smithsonian and the Max Planck Institute for Astronomy, and the lead author of the paper describing this discovery. “While there have been many claimed detections of systems like this, almost all these discoveries have subsequently been refuted. This is the first unambiguous detection of a Sun-like star in a wide orbit around a stellar-mass black hole in our Galaxy.”
Though there are likely millions of stellar-mass black holes roaming the Milky Way Galaxy, those few that have been detected were uncovered by their energetic interactions with a companion star. As material from a nearby star spirals in toward the black hole, it becomes superheated and generates powerful X-rays and jets of material. If a black hole is not actively feeding (i.e., it is dormant) it simply blends in with its surroundings.
“I've been searching for dormant black holes for the last four years using a wide range of datasets and methods,” said El-Badry. “My previous attempts — as well as those of others — turned up a menagerie of binary systems that masquerade as black holes, but this is the first time the search has borne fruit.”
The team originally identified the system as potentially hosting a black hole by analyzing data from the European Space Agency’s Gaia spacecraft. Gaia captured the minute irregularities in the star’s motion caused by the gravity of an unseen massive object. To explore the system in more detail, El-Badry and his team turned to the Gemini Multi-Object Spectrograph instrument on Gemini North, which measured the velocity of the companion star as it orbited the black hole and provided precise measurement of its orbital period. The Gemini follow-up observations were crucial to constraining the orbital motion and hence masses of the two components in the binary system, allowing the team to identify the central body as a black hole roughly 10 times as massive as our Sun.
It is not at all clear how the solar-mass star could have survived that episode, ending up as an apparently normal star, as the observations of the black hole binary indicate. Theoretical models that do allow for survival all predict that the solar-mass star should have ended up on a much tighter orbit than what is actually observed.

This could indicate that there are important gaps in our understanding of how black holes form and evolve in binary systems, and also suggests the existence of an as-yet-unexplored population of dormant black holes in binaries.

“It is interesting that this system is not easily accommodated by standard binary evolution models,” concluded El-Badry. “It poses many questions about how this binary system was formed, as well as how many of these dormant black holes there are out there.”

“As part of a network of space- and ground-based observatories, Gemini North has not only provided strong evidence for the nearest black hole to date but also the first pristine black hole system, uncluttered by the usual hot gas interacting with the black hole,” said NSF Gemini Program Officer Martin Still. “While this potentially augurs future discoveries of the predicted dormant black hole population in our Galaxy, the observations also leave a mystery to be solved — despite a shared history with its exotic neighbor, why is the companion star in this binary system so normal?”