There May Be 4 Quintillion Alien Spacecraft Lurking Near Earth, Scientist Say 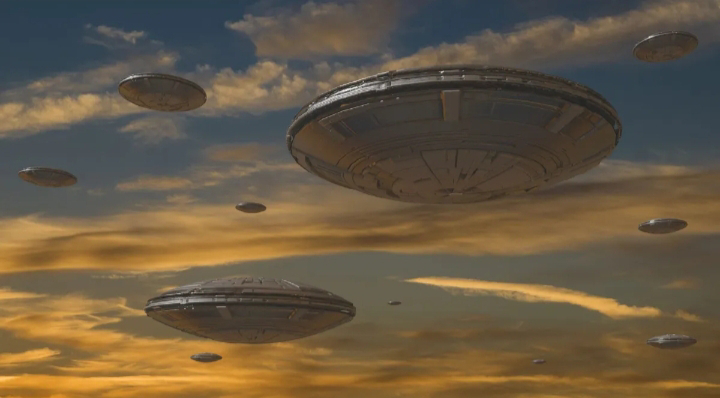 Alien-hunting Harvard astrophysicist Avi Loeb has once again made headlines with one of his statements. New, not yet backed by peer-reviewed research.
This time, Loeb claimed that it is possible - that there could be as many as four quintillion alien spacecraft lurking in our solar system. That would be, uh, wow a lot of flying saucers.
The study, spotted by The Daily Beast, is a follow-up to the first discovery of an interstellar object to visit our solar system, dubbed 'Oumuamua, back in 2017.
'Oumuamua was a very strange object, over which, scientists are still embroiled in debate. It was a cigar shaped object. Estimated at its size, it has sparked much debate as to whether it was an extraterrestrial visitor.
Loeb isn't explicitly saying that 'Oumuamua was an alien per se, but he is saying that we should be open to that possibility. In light of that approach, he's basically asking what "respectable" scientists would never rule out: how many potential 'Oumuamua could there be in our solar system that go unnoticed?
First, Loeb and fellow Harvard astronomer Carson Ezell looked at how many interstellar visitors we've already seen.
Astronomers quoted by The Daily Beast wrote in the study, "we can use recent rates of detection of interstellar objects and known capabilities to estimate the density of similar objects in the solar neighborhood."
Since 'Oumuamua, three more interstellar objects have been detected by astronomers, making it four in eight years. At that rate, Loeb and Ezeler calculate that there could be a staggering 40 decillion interstellar objects in the entire Solar System, including regions beyond the reach of our instruments.
While narrowing down the scope of the "habitable zone" near the Sun brings that number down to a more modest 4 quintillion figures, which is potentially exciting, given that if some of those aliens are there, they would be easier to detect.
Some of Loeb's theories are boundary-pushing, but he never fails to raise some fascinating points. Even if most of the 4 quintillion interstellar objects turn out to be bits of space rock, which Loeb believes is likely, that still leaves room for some of them to be alien spacecraft.
Miscellaneous