NASA’s Webb Telescope Reveals Links Between Galaxies Near and Far

A new analysis of distant galaxies imaged by NASA’s James Webb Space Telescope shows that they are extremely young and share some remarkable similarities to “green peas,” a rare class of small galaxies in our cosmic backyard.

“With detailed chemical fingerprints of these early galaxies, we see that they include what might be the most primitive galaxy identified so far.

At the same time, we can connect these galaxies from the dawn of the universe to similar ones nearby, which we can study in much greater detail,” said James Rhoads, an astrophysicist at NASA's Goddard Flight Centre in Greenbelt, Maryland, who presented the findings at the 241st meeting of the American Astronomical Society in Seattle.

A paper describing the results, led by Rhoads, was published Jan. 3 in The Astrophysical Journal Letters. 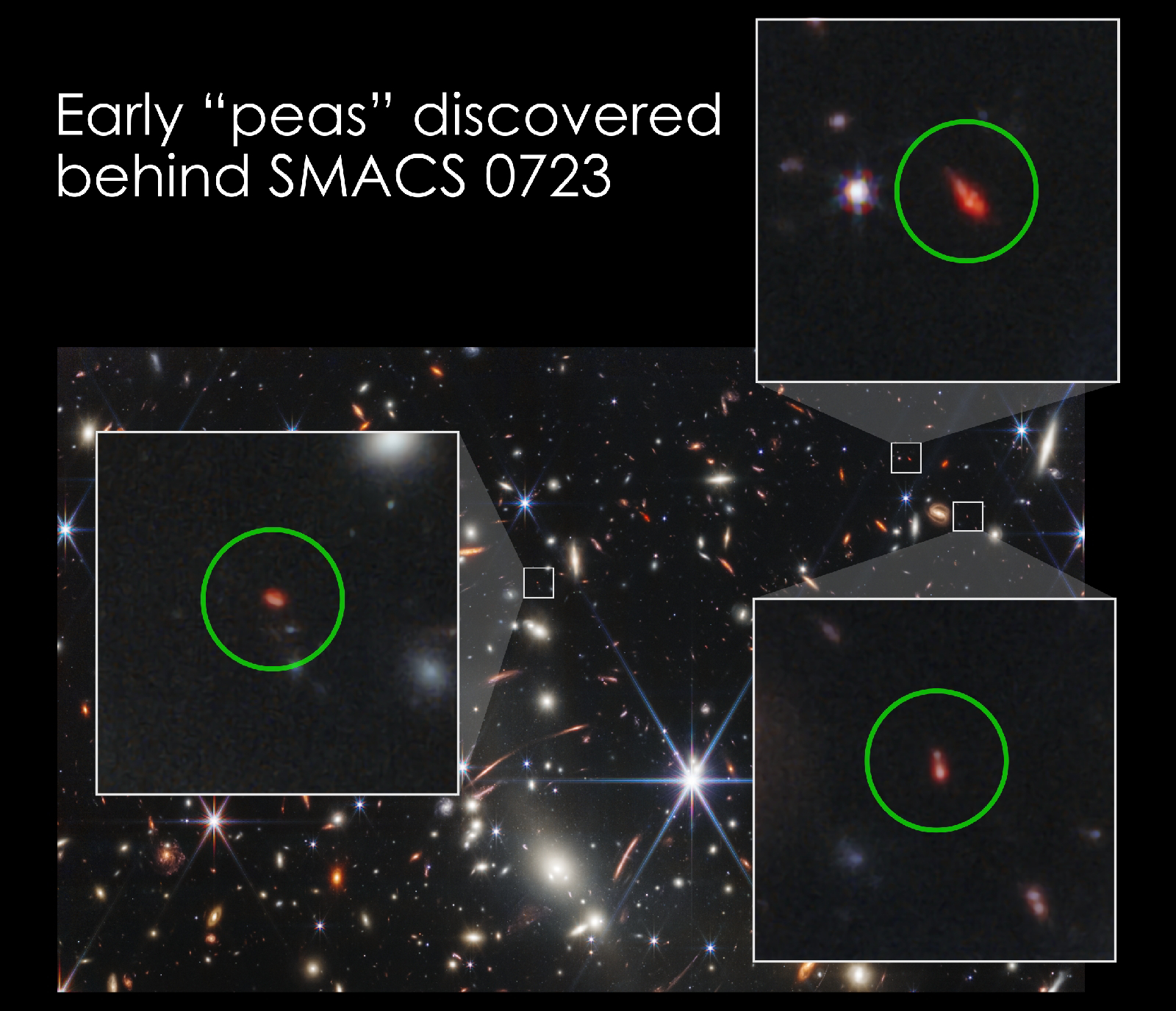 A trio of faint objects (circled) captured in the James Webb Space Telescope’s deep image of the galaxy cluster SMACS 0723 exhibit properties remarkably similar to rare, small galaxies called “green peas” found much closer to home. The cluster’s mass makes it a gravitational lens, which both magnifies and distorts the appearance of background galaxies. We view these early peas as they existed when the universe was about 5% its current age of 13.8 billion years. The farthest pea, at left, contains just 2% the oxygen abundance of a galaxy like our own and might be the most chemically primitive galaxy yet identified. Credit: NASA, ESA, CSA, and STScI

Green pea galaxies were discovered and named in 2009 by volunteers taking part in Galaxy Zoo, a project where citizen scientists help classify galaxies in images, starting with those from the Sloan Digital Sky Survey.

Peas stood out as small, round, unresolved dots with a distinctly green shade, a consequence of both the colors assigned to different filters in the survey’s composite images and a property of the galaxies themselves.

A green pea galaxy imaged by the Sloan Digital Sky Survey is shown alongside an infrared picture of an early pea captured by NASA’s James Webb Space Telescope. At left is J122051+491255, a green pea about 170 million light-years away that’s about 4,000 light-years across, a typical size. At right is an early pea known as 04590, whose light has taken 13.1 billion years to reach us. Compensating for the cluster’s gravitational lensing effect and the galaxy’s greater distance to us, 04590 is even more compact, comparable to the smallest nearby green peas. Credit: SDSS and NASA, ESA, CSA, and STScI
Green pea galaxy colors are unusual because a sizable fraction of their light comes from brightly glowing gas clouds.
The gases emit light at specific wavelengths – unlike stars, which produce a rainbow-like spectrum of continuous color. Peas are also quite compact, typically only about 5,000 light-years across or about 5% the size of our Milky Way galaxy.

“Peas may be small, but their star-formation activity is unusually intense for their size, so they produce bright ultraviolet light,” said Keunho Kim, a postdoctoral researcher at the University of Cincinnati and a member of the analysis team. “Thanks to ultraviolet images of green peas from Hubble and ground-based research on early star-forming galaxies, it’s clear that they both share this property.”

In July 2022, NASA and its partners in the Webb mission released the deepest and sharpest infrared image of the distant universe yet seen, capturing thousands of galaxies in and behind a cluster known as SMACS 0723. The cluster’s mass makes it a gravitational lens, which both magnifies and distorts the appearance of background galaxies.

Among the faintest galaxies behind the cluster were a trio of compact infrared objects that looked like they could be distant relatives of green peas. The most distant of these three galaxies was magnified by about 10 times, providing a significant assist from nature on top of the telescope’s unprecedented capabilities.

Webb did more than image the cluster – its Near-Infrared Spectrograph (NIRSpec) instrument also captured the spectra of selected galaxies in the scene.

When Rhoads and his colleagues examined these measurements and corrected them for the wavelength stretch resulting from the expansion of space, they saw characteristic features emitted by oxygen, hydrogen, and neon line up in a stunning resemblance to those seen from nearby green peas. 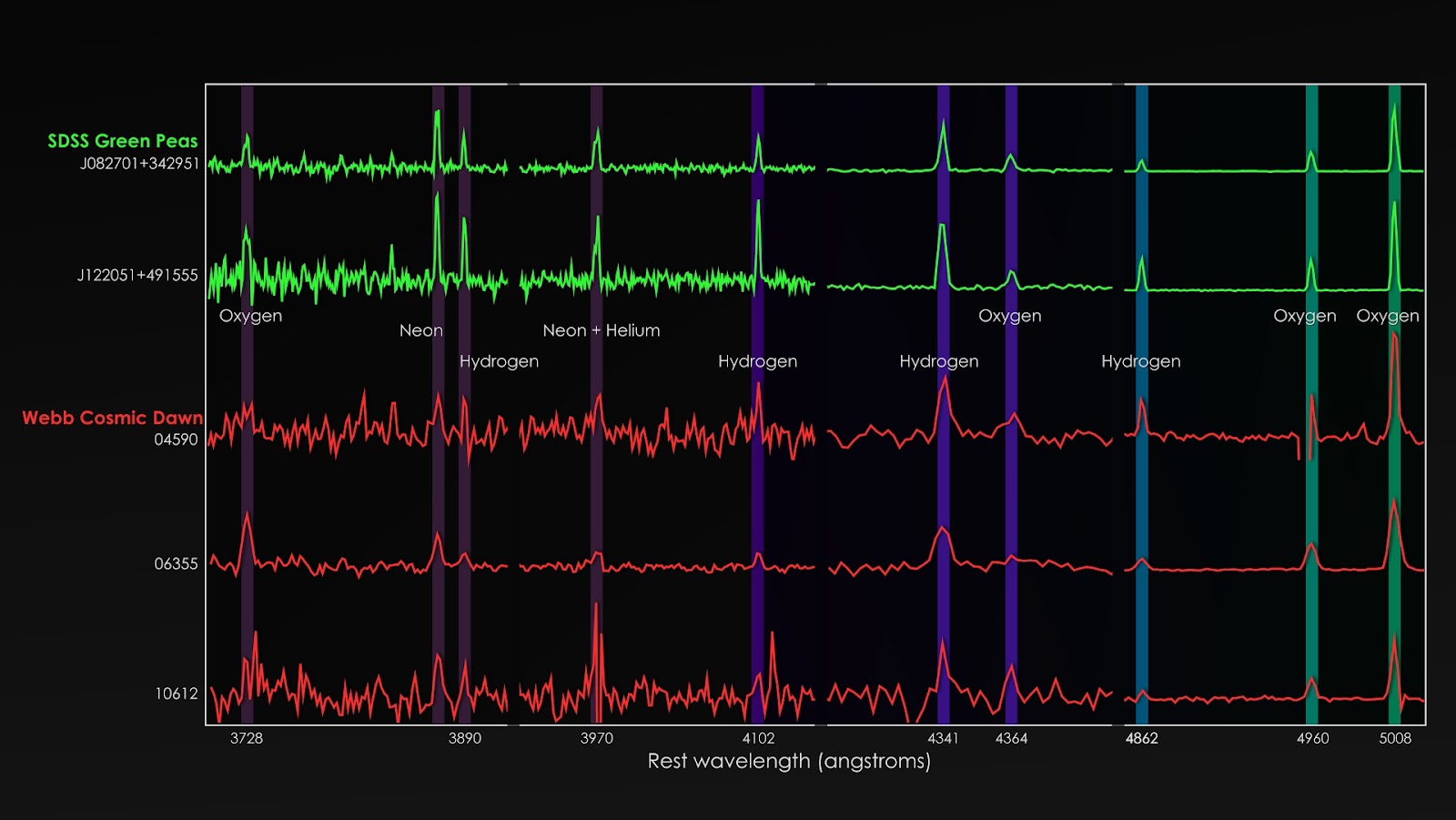 As stars produce energy, they transmute lighter elements like hydrogen and helium into heavier ones. When stars explode or lose their outer layers at the ends of their lives, these heavier elements become incorporated into the gas that forms the next stellar generations, and the process continues. Over cosmic history, stars have steadily enriched the universe.

Two of the Webb galaxies contain oxygen at about 20% of the level in our Milky Way. They resemble typical green peas, which nevertheless make up less than 0.1% of the nearby galaxies observed by the Sloan survey. The third galaxy studied is even more unusual.

“We’re seeing these objects as they existed up to 13.1 billion years ago, when the universe was about 5% its current age,” said Goddard researcher Sangeeta Malhotra. “And we see that they are young galaxies in every sense – full of young stars and glowing gas that contains few chemical products recycled from earlier stars. Indeed, one of them contains just 2% the oxygen of a galaxy like our own and might be the most chemically primitive galaxy yet identified.”

NIRSpec was built for ESA (European Space Agency) by Airbus Industries. Its array of nearly half a million microshutters – tiny doors that can be opened or closed to admit or block light – allow it to capture spectra of up to 100 individual objects at a time. The microshutter array and detector subsystems were fabricated by NASA.