Scientists Spot Baby Alien Planet That Might be Forming Moons 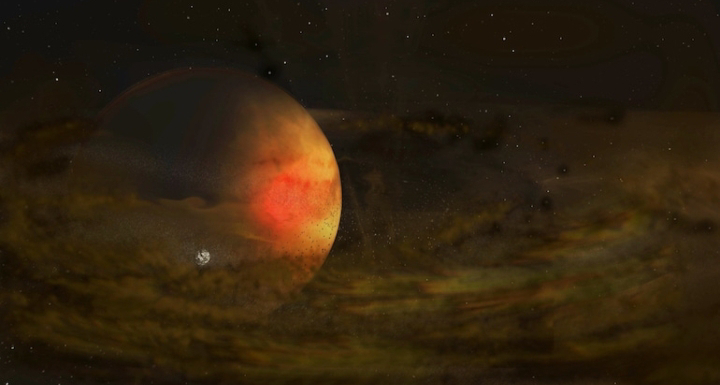 Astronomers have recently discovered a unique planet that is still in its infancy and is small enough to provide important insights about the formation of planets.
Another interesting thing that makes it important is that it can also give birth to moons. This may be similar to the way the moons of other planets including our Earth were formed. But essentially the planets do not have moons yet.
This baby planet is one of the youngest exoplanets ever discovered. It is located at a distance of about 200 astronomical units, or 18.59 billion miles, from its host star.
The star located about 395 light years away from Earth is just a few billion years old compared to its planet, which is just about 1.5 million years old.
'The best way to study planet formation is to observe planets while they're forming' said Jaehan Bae, the University of Florida professor of astronomy who led this discovery.
The study published in the journal The Astrophysical Journal Letters marks the first time astronomers have analyzed an exoplanet's surrounding disk of gas, which not only provides more information about the planet's history but also how its future moons will develop.
Finding baby planet
Scientists were observing five stars as part of a broader program, using the Atacama Large Millimeter/Submillimeter Array (ALMA), known as MAPS to understand the chemistry of planet formation.
They observed gas in a circumplanetary disk and found a blob of emitted light in the middle of an otherwise empty gap in the gas surrounding the star, indicating the presence of a Jupiter-sized planet.
After analyzing gaps in these circumplanetary rings and other anomalies in the AS 209 disk, the researchers identified the young planet, surrounded by a cloud of material known as a circumplanetary disk.
"I was always curious to learn how our solar system's planets had formed in the past. We can study planets in our solar system directly in many ways. We can get samples of planets, asteroids and comets. But we still can't see what happened in the past” Bae added.
Why do we need to study this baby planet?
Planetary evolution has been going on for billions of years, ever since the big bang happened and the universe began expanding.
However, it is difficult to study planetary formation in our Solar System, especially if you want to go back in time and see the situation when these planets, including Earth, were born.
While the planet's young age and surrounding gas will help astronomers answer existing questions about planet formation, the new detection also has scope for understanding how did it form so far away from its own star?
The planet is nearly 200 AU away from its star and one astronomical unit is the distance between the Earth and the sun.
To better understand this staggering distance, compare it with Neptune, which is just 30 astronomical units away from the Sun.
James Webb Telescope to the rescue
Astronomers have been approved to conduct an early analysis of AS 209 with the newly launched James Webb Telescope.
The team will get their hands on this state-of-the-art equipment this month and are hopeful it will find the planet out there.
Exoplanets