The Icy Surface of Jupiter's Moon Europa is Less Salty 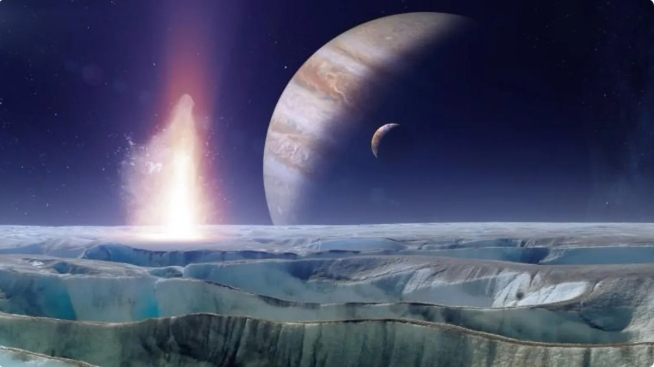 The icy surface of Jupiter's moon 'Europa' is made of Fragile Ice (crystal structure of ice). It contains very little amount of salt.
Scientists, until now, were considering the icy surface of Europa to be quite salty.
The research by scientists from the Texas Institute of Geophysics, was published in the journal Astrobiology.
According to the lead author of this research, Natalie Wolfemberger, 'the focus has been on the sea salts and composition of Europa because only through this, we can know how biological evolution can be possible there'.
Fragile ice is also formed under the ice sheets on Earth. Researchers are trying to find out how the ice sheets around Europa formed.
The first ice surface in Antarctica while the second Fragile ice is formed in cold sea water.
Europa's ocean contains twice as much water as Earth
According to NASA, Europa is covered by deep oceans about 60-150 kilometers. Above it is a sheet of ice about 15-25 km thick.
Europa is about 1/4 the size of Earth, but its oceans contain about two and a half times as much water as on Earth.
Astronomers believe that Europa may be an important destination for the search for alien life in our solar system.
NASA's Europa Clipper mission scheduled to launch in 2024 will explore the possibilities of alien life on Europa
Solar System