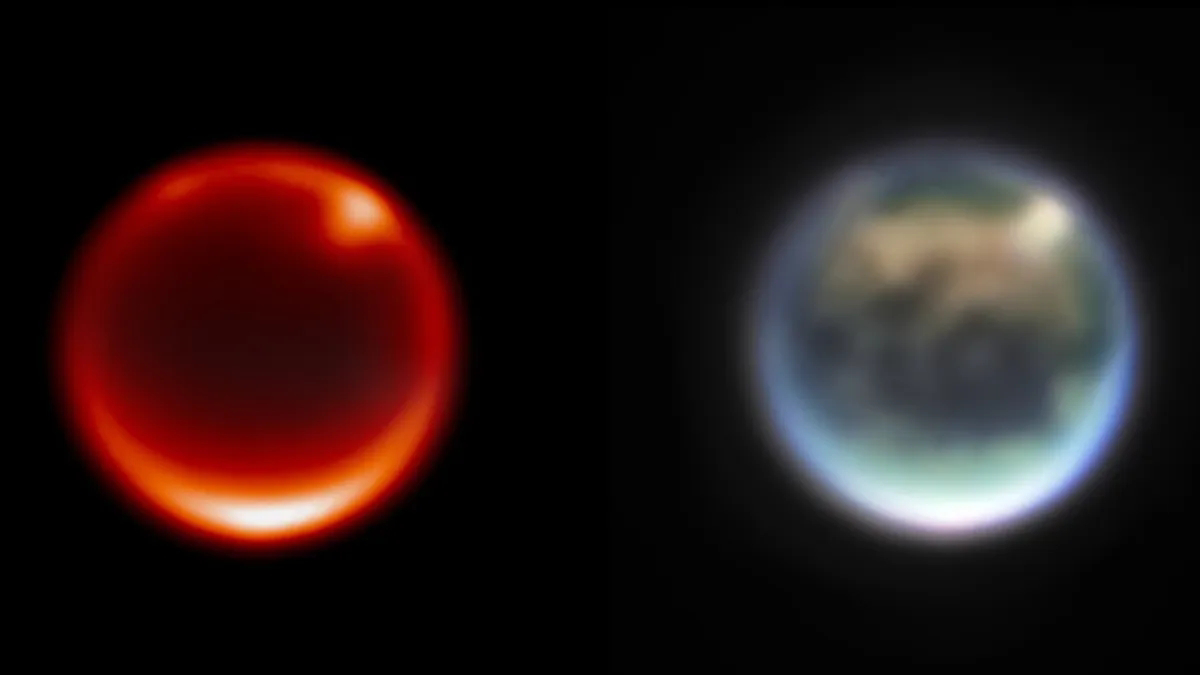 Saturn's largest moon, Titan, is the target of an upcoming NASA mission to search for alien life among its thick atmosphere and rivers, lakes, and oceans of liquid methane.

Those missions won't reach Titan until the 2030s, but scientists have eagerly awaited the first James Webb Space Telescope observations of the distant moon.

That time has come with the Webb team revealing observations of two large methane clouds in Titan's atmosphere, taken on November 4, as per a NASA press statement.

Scientists have long targeted Titan for observations because it is home to a surprisingly Earth-like surface of rivers, lakes, and seas. This suggests that there might be some form of life on the moon, though it would likely be very different from Earth's, as its seas and rivers are made up of liquid methane.

NASA's Cassini mission arrived at Saturn in 2004 and provided an unprecedented view of Saturn and Titan. However, from its deep space location in Lagrange Point 2, Webb is able to "probe the composition and surface of [Titan] in ways even the Cassini spacecraft could not," NASA wrote on Twitter.

The James Webb observatory spent a total of 15 hours observing Titan. The observations were organized by Conor Nixon, an astronomer at NASA's Goddard Space Flight Center in Maryland. As NASA points out in its statement, Titan's "atmosphere is filled with a thick haze that obscures visible light reflecting off the surface." That made it the perfect candidate for Webb's infrared imaging instruments, which can peer through thick clouds and see what's hiding beneath.

"Fantastic! Love seeing the cloud and the obvious albedo markings. So looking forward to the spectra! Congrats, all," said Heidi Hammel, a planetary scientist at the Association of Universities for Research in Astronomy and a project lead for JWST's solar system work.

The albedo markings refer to bright and dark regions on Titan's surface, while the spectra refer to reading from the observatory's Near-Infrared Spectrograph (NIRSpec). These split the light observed from Titan's atmosphere into colors that correspond to different compounds, allowing scientists to analyze its chemical composition.

NASA shared a number of reactions from scientists, shared via email, in its statement. Sebastien Rodriguez, an astronomer at the Université Paris Cité and who is working on the research, wrote, "at first glance, it is simply extraordinary. I think we're seeing a cloud!"

The researchers eventually realized they were looking at an unprecedented observation of not just one but two clouds in Titan's atmosphere. One of these was located over Kraken Mare, the largest of Titan's seas. Though their allotted time with Webb had passed, the scientists decided to take follow-up observations of these clouds with the collaboration of the Keck Observatory in Hawai'i. They managed to attain observations of the same clouds only two days after the Webb images.

"We were concerned that the clouds would be gone when we looked at Titan two days later with Keck," Imke de Pater, an astronomer at the University of California, Berkeley, leads Keck's observations of Titan, explained in NASA's statement. "But to our delight there were clouds at the same positions, looking like they had changed in shape."

It is worth noting, however, that the positioning of the clouds in the Keck Observatory observations may have just been coincidental, as high cloud activity was expected during the late summer period on Titan's northern hemisphere.

Webb's observations include images taken by the observatory's NIRCam and NIRSpec images. The former allows scientists to focus on Titan's lower atmosphere, while the latter will enable them to determine what compounds are in the lower atmosphere.

NASA's statement says James Webb won't observe Titan again until May or June 2023. When it is trained on the moon once again, it will use its Mid-Infrared Instrument (MIRI) to help scientists better understand their spectra readings.

NASA is working on its Dragonfly mission, which will fly a drone — similar to its Mars Ingenuity helicopter — through Titan's atmosphere at some point in the 2030s. Until that point, scientists here on Earth have a whole load of Titan data to trawl through.

This article was originally published in Interesting Engineering