on February 05, 2022
Scientists have discovered a rare class compact star called a magnetar, located 13 million light-years away. They have discovered the first clue to understanding the short-period brightness of this star. 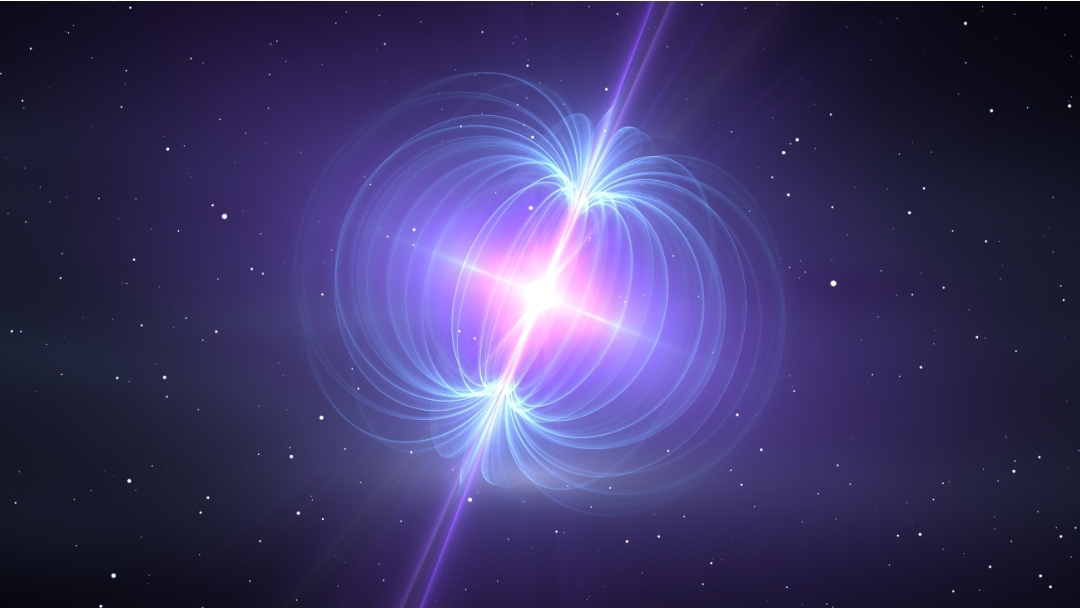 These compact stars with the strongest magnetic fields, of which only 30 have been seen in our galaxy so far.
These have suffered intense eruptions that still little is known about them due to their unpredictable nature and their short duration.
Let us tell here that the magnetar is a neutron star with an extremely strong magnetic field. Scientists have long been concerned about such short and rapid eruptions.
They have momentary X-ray vibrations of energy several times that of the Sun and have periods ranging from a few milliseconds to a few microseconds.
When massive stars such as the supergiant stars with a total mass of 10 to 25 solar masses collapse, they can become neutron stars.
Among neutron stars, there is a small group with the strongest magnetic field. These things, of which only 30 are known so far.
These stars are prone to rapid explosions, due to their short duration, as little as one tenth of a second, so little has been known about them.
Andalusian Institute of Astrophysics (IAA-CSIC) Professor Alberto J.A scientific group led by Castro-Tirado studied one explosion in detail.
They did manage to measure various oscillations, or vibrations, during moments of very high energy which are an important component of a neutron star with an extremely strong magnetic field.
Dr. Shashi Bhushan Pandey of the Aryabhatta Research Institute of Observational Sciences (ARIES) an institute of the Department of Science and Technology, worked closely with Professor Alberto Castro Tirado and other members of the group in this research.
This research is published in the journal Nature. Even in a dormant state, neutron stars with extremely strong magnetic fields can be several thousand times brighter than our Sun.
But in the case of brightness we studied, GRB 2001415, which occurred on April 15, 2020 and lasted only about one tenth of a second, the energy released during this time is equal to that of our Sun in a million (100,000) radiates over the years.
IAA-CSIC lead researcher Alberto J.Castro-Tirado said that the observations revealed several tremors, with the first tremor only ten microseconds away, much faster than other extreme astronomical travellers.
Castro-Tirado explains that it is believed that explosions in magnetars may be caused by instability in their magnetospheres or by a type of "earthquake" or "starquake".
Which is produced in their crust, it is a hard and elastic layer about a kilometer thick.
Due to this, a kind of waves are created in the magnetosphere of the star. These waves, which are well known in the case of the Sun, are called Alfven waves and bouncing back and forth between points at the base of the magnetic field lines, they interact with each other with energy dissipating.
The oscillations found in the eruption correspond to emissions produced by interactions between Alfvén waves, whose energy is rapidly absorbed by the crust.
Thus, the magnetic reconnection process ended in a few milliseconds and, therefore vibrations were also detected in GRB200415, which disappeared within 3.5 milliseconds after the burst.
Analysis of this phenomenon has made it possible to infer that the magnitude of the glow was similar to or even greater than that of a neutron star.
Nikolai Ostgaard of the University of Bergen Norway said the explosion was detected by the Atmosphere-Space Interaction Monitor (ASIM) instrument on the International Space Station.
The scientific team was able to resolve the temporal structure of the event, by analyzing minute scale data from over a year.
Although many papers have been published about the phenomenon, as ASIM was the only mission that detected the main detonation phase in the full energy range of photons without saturation, this allows the ASIM instrument to unveil some of the mysteries surrounding magnetars.
IAA-CSIC researcher Javier Pascual said that the detection of oscillations in the GRB200415 has been a challenge due to the brevity of the signal.
We therefore attribute this achievement to sophisticated data analysis techniques that have been applied independently by individual team members.
But it is undoubtedly a technological achievement, due to the excellent quality of data provided by the ASIM instrument on the International Space Station.
Understanding these oscillations could shed light on the structure of these mysterious objects, says Michael Gabler of the University of Valencia in Spain.
This brightness was detected in 2 out of 30 known neutron stars with an extremely strong magnetic field in our Milky Way galaxy, but it was also detected in two others located in other galaxies.
GRB2001415 is the most distant neutron star ever to explode in a strong magnetic field, found in the Group of Galaxies (NGC 253) about 13 million light-years away.
In their conclusion, Castro-Tirado said that it is extremely rare to detect huge flashes from a neutron star with a strong magnetic field.
This explosion has provided an important component in understanding how magnetic stress is generated in and around a neutron star.
Researcher Dr Shashi Bhushan Pandey said that the continuous monitoring of neutron stars with strong magnetic fields in nearby galaxies will help to understand this phenomenon and pave the way to learn more about their bursts, which is one of the most important topics in astronomy today. One of the mysterious events.
Stars