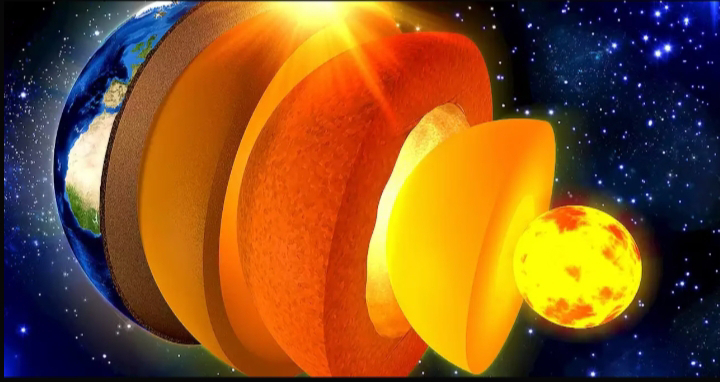 Researchers say they have found new evidence of an "ocean" deep inside Earth. For the past few years, researchers had been assuming that there might be something hidden in the Earth's core.
The findings were published in Nature Geoscience by an international team of researchers after analyzing an extremely rare diamond formed at a depth about 410 miles beneath Botswana.
A boundary between Earth's upper and lower mantle, known as the transition zone which extends hundreds of miles into Earth's interior—holds far more water and carbon dioxide than has been estimated.
The research could change our understanding about Earth's water cycle and have far-reaching implications for how it evolved in the marine world we know today over the past 4.5 billion years.
"In this study we have shown that the transition zone is not a dry and sponge area, but it holds considerable amounts of water" Frank Brenker, a geologist at Goethe University in Frankfurt, said in a statement.
"This brings us one step closer to Jules Verne's idea of ​​an ocean inside the Earth." Although this massive reservoir is a deep slurry of sediment and hydrous rock – and at nearly unimaginable pressures – it can be extraordinary in total volume.
"These sediments can hold large amounts of water and carbon dioxide" Branker said. "But until now it was unclear how much enters the transition zone in the form of more stable, hydrous minerals and carbonates - and so it was also unclear whether large amounts of water are actually stored there."
In fact, it is estimated that the transition zone alone may contain up to six times the total amount of water present in all oceans of Earth.
The diamond came from a region of Earth's mantle where ringwoodite (an element that forms only under high levels of pressure and temperature in Earth's mantle) but it can hold water well that is most popular.
Scientists already suspected there was too much water in Earth's transition zone after analyzing a similar diamond in 2014, but the latest research adds credence to this theory.
"If you only have one sample, it could just be a local hydrous field" Suzette Timmerman, a mental geochemist and postdoctoral fellow at the University of Alberta who was not involved in the study, told Scientific American.
Planet Earth