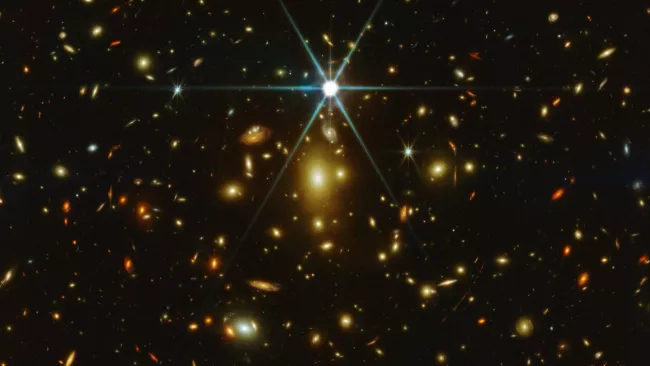 Earendel, the most distant known star in the universe in a deep field captured by the James Webb Space Telescope. (Image credit: NASA/ESA/CSA/STScI)
NASA's state-of-the-art Infrared Observatory (JWST) has captured the farthest known star in the universe, which is located about 12.9 light-years away from Earth and visible as a tiny dot.
A group of astronomers known as the Cosmic Spring JWST shared a new photo of Earendel on Twitter taken by James Webb Space Telescope.
Originally, the most distant known star was named after a character in JRR Tolkien's novel 'The Silmarillion', indicating that it is the most distant star.
This isn't the first time we've seen Earendel, though. James Webb's predecessor, Hubble, observed it in March, and NASA said in a statement at the time that 'This star is one of the earliest stars that came into existence after the Big Bang'.
This star is located in the constellation Cetus and is located in the constellation Sunrise Ark Galaxy (a galaxy named after its crescent).
The James Webb Space Telescope was able to find the distant star with the help of gravitational lensing. Gravitational lensing works on the principle of bending of light and is quite effective.
In fact, the Earendel aligns perfectly with the cluster in front of it.
"It's a really lucky alignment," Dan Coe at the Space Telescope Science Institute in Maryland and a team member of the new discovery told New Scientist. "No one has ever seen a star so big, not to mention a galaxy."
According to New Scientist, this star is, in fact, ten billion light-years more distant than the next most distant star we've ever seen — and the James Webb Space Telescope is only the beginning.
James Webb Space Telescope - JWST